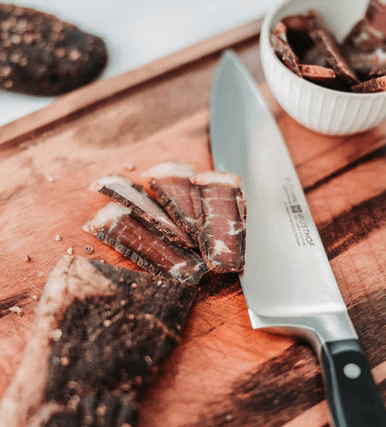 It’s time for the big game. Or maybe your favorite movie. Perhaps you need some snacks for the office. And the usual potato chips, popcorn, or candies won’t do.

All snackers need a bit of variety in their lives and would benefit from introducing more robust, sophisticated flavors to their palate.

Biltong is to South Africa as beef jerky is to North America. Now, there are many differences when comparing biltong vs jerky, but we’ll delve into those later.

Biltong is a cured meat that’s dried and thinly sliced. And traditionally, biltong uses spices such as:

However, a biltong recipe isn’t limited to those above options. Some might tell you the best biltong recipe contains bicarbonate soda for more tender meat.

While other recipes even call for chili flakes, paprika, dried garlic, and brown sugar. An assortment of meats can be used for a biltong recipe, but beef is most often used.

What is the Biltong Origin Story?

The biltong origin story goes back 400 years. It starts with South Africa’s indigenous people, who cured meat with salt before hanging it to dry as a preservation technique.

Eventually, the arrival of European settlers introduced a more sophisticated curing process involving pepper, coriander, and vinegar. Here’s where the biltong South Africa made world-famous was brought to life.

Since biltong is a famously durable treat, it became a staple for sea travel. And it played a significant role when the Dutch settlers migrated north.

Plus, given that the dried strip of cured beef lasted so long and offered multiple health benefits, it proved the ideal travel snack.

(Speaking to the above point, if you’re wondering, “is biltong healthy?” the short answer is yes. Not the lowest in calories, but it’s a rich protein and essential vitamin/mineral source and possesses minimal carbs.)

While South Africa has gone through many changes over the centuries, the one thing that hasn’t changed is the nation’s universal love of biltong. Unlike in North America, you’ll find it in almost every butcher and supermarket in South Africa. And you’ll find it regularly enjoyed during any cricket or rugby match.

Before going further, biltong is only one kind of delicious food in a country filled with mouthwateringly good culinary delights.

Where Can You Find the Best Biltong for Sale?

Finding the best biltong for sale can be challenging when you don’t live in South Africa.

Your best bet is to look for the best South African butchers in your area or research what local grocery stores sell imported South African food.

If you live in South Africa, then we got you covered! SnackMagic has a Spice It Up Box filled with excellent snacks and biltong, of course. Spice up your snacking options or treat a friend or loved one with this unique stash that will be sure to tickle anyone’s tastebuds.

While there are similarities when comparing biltong vs beef jerky, they are two very different snacks.

For one thing, biltong is cooked and air-dried as one hunk of meat before being sliced into smaller strips. On the other hand, beef jerky is cut into little strips before cooking and drying.

The result? Biltong has a fluffier, softer texture than the tougher, chewier beef jerky.

Why is Biltong So Popular?

The entirety of this article highlights why biltong is so popular. It’s delicious, durable, and offers health benefits.

There’s another reason why biltong makes waves wherever and whenever it’s served–its versatility as a snack. For instance, are you having trouble deciding on exciting snacks for the big game? Then biltong will fit the bill.

Or, are you having a more late-night snack with close friends and want to really wow them with an eclectically tasty offering? Biltong is your answer.

And if you’re hosting a party–whether at home or work–adding biltong to your snack platter will give your guests (or employees) something truly memorable to snack on.

Winning Over Your Remote and In-Office Employees with International Offerings

Enter any workplace, and you’re likely to find a team of people who enjoy delicious snacks. It’s a universal truth.

But how can you differentiate yourself as an employer through your snack offerings? We suggest our international menu at SnackMagic, which offers many globally beloved delicacies and collections for employees worldwide.

Such unique, eclectic offerings will give your remote and in-office team members something to be excited about during their workday. As a result, they’ll be more motivated and have their spirits lifted, helping boost their productivity and commitment to your company.

SnackMagic is a global corporate gifting platform. We offer build your snack/swag stashes and curated stashes for your virtual gift recipients. For in person or office, we offer Grab & Go trays, goodie bags, and bulk snack ordering. Read our blog for tips and advice on corporate gifting, globally.

ABOUT US
SnackMagic is the only 100% customizable snack and beverage gifting service. Set up an order for employees, friends, family, clients, remote teams or virtual event attendees in minutes
FOLLOW US
MORE STORIES

Everything You Need to Know to Find your Perfect Corporate Holiday...